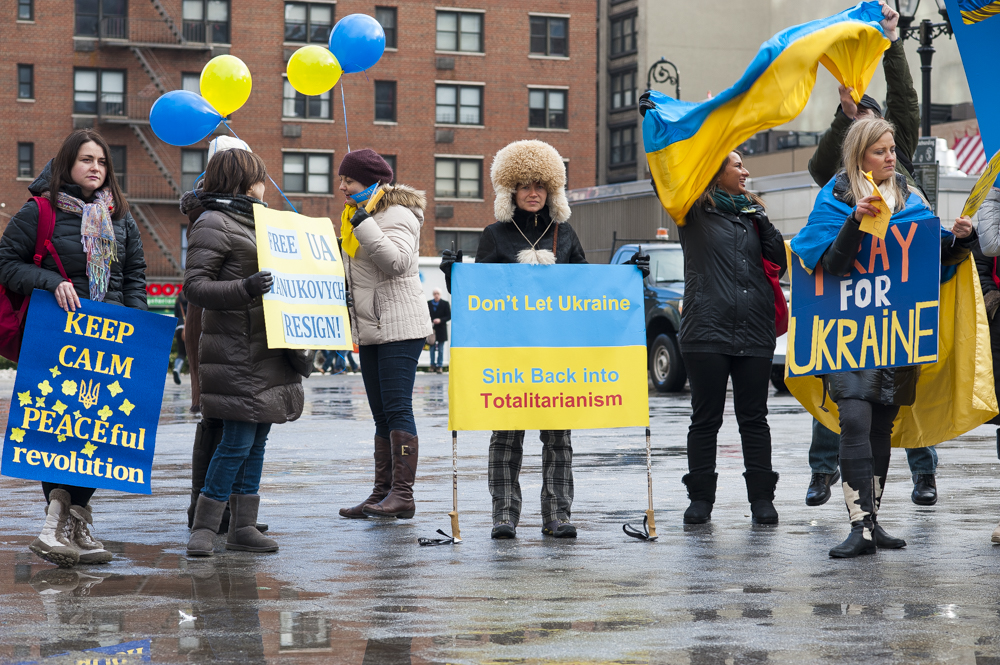 Russian president Vladimir Putin has no qualms about strong-arming his political opposition, at home or abroad, into submission.  Neighboring Ukrainians, long-inured to Moscow’s sordid influence of their political process are finally standing up.  Ukrainian-born, New Yorker Tetyana Dzhula offers her first-hand perspective of the brewing conflict that has NATO on edge.

Me: Tetyana, Are you in Ukraine now?

Me: May I ask you a few questions? You have a unique perspective being in Ukraine now…

Tetyana: Sure. Let me switch to my mom’s iPad. I’m on my phone.

What village are you from?

The town is called Zbarazh. It’s in western Ukraine.

How far away from the fighting is your village?

The region in trouble is about 700 miles away, eastern Ukraine.

What is the general mood among the people there?

The general mood is complex. The military invasion started in March when the Russian soldiers took over Crimea. It’s been over six months of turmoil. I don’t know how to explain it. We are both drained, but also full of strength and love. I’ve always loved Ukraine, but some people have come to love it only now. Our country’s situation with the bad news coming every day is very hard, but at the same time we are united and helping each other so much that there’s also a lot of happiness.

You mentioned earlier that twenty-three men were recently mobilized from your village. Are they ready to go to the front?

My grandma said this. She also told me that two of my neighbors were mobilized. I believe that they are training now in western Ukraine, which usually lasts just a few weeks. They will be going to the east soon.

No, not first hand. Most of our media includes reports from the east, constantly. Updates are every hour. The situation changes quickly so there’s a lot of reporting, which includes soldiers speaking about their experiences. Putin claims the Russian military is not in Ukraine. This allows Russian soldiers to do what they want, because officially, “they are not here.” From the Russian side of the border they are shelling our easternmost cities and towns.  They are firing from their side of the border, and still they blame us! In our occupied cities, the Russian soldiers are harassing, kidnapping, and torturing people. They murder families, everyone including small children, if they are trying to leave the town. If the Russian soldiers are retreating, they plant mines. Many children die from exploding mines. These terrorists leave behind mines that look like pens so that people will pick them up. They also wave white flags, and when the Ukrainian soldiers approach–they shoot. They fire on the ambulances, which are trying to pick up the wounded. They are also firing at hospitals and water pumps in order to destroy the infrastructure.

Do you have confidence in the political leadership of Ukraine?

We have the invasion right now because we’ve changed the leadership. The president that ran away was controlled by the Russian government.  Putin now has no political control so he is using force. There are lots of problems, but we think that we are on the right path. People generally like the new president and the prime minister. They are not ideal, but they are pro-Ukrainian and pro-western. We also give them credit for taking over at such difficult time.

What do you see as the end game of this conflict?

I see Ukraine liberated after heavy loses. Putin spent too much money on this war, and he still doesn’t even have Ukraine yet. I think his inner circle will grow tired and angry with their loses and make him stop.