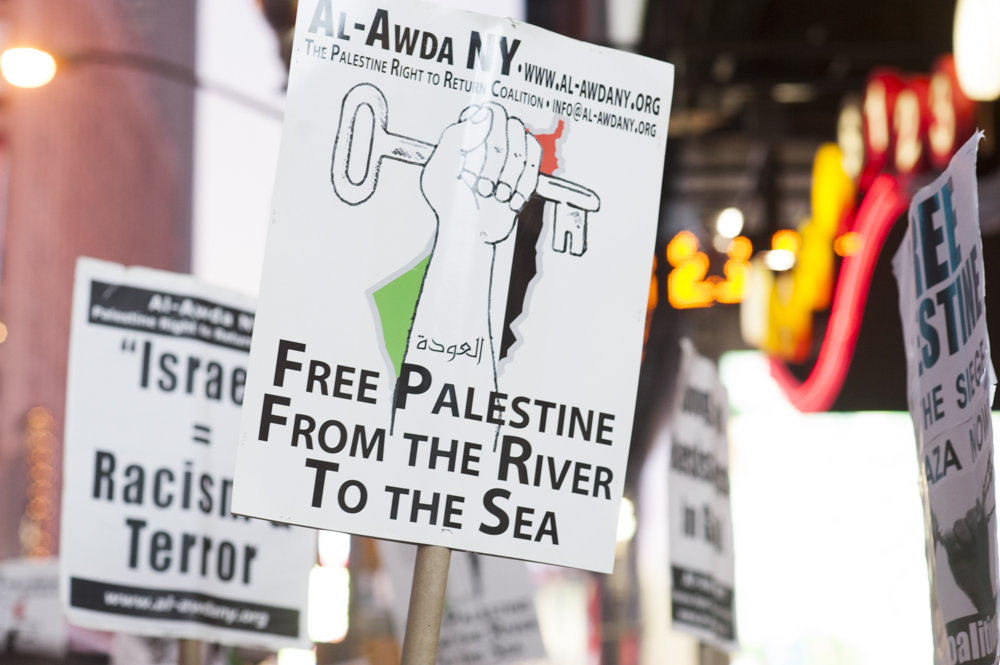 In New York City, there’s bound to be a protest scheduled for or against one cause or another-a rally in solidarity with the people of Gaza and against Israel (as pictured in the above photograph of Times Square), a counter-protest in favor of the Israeli government, a People’s Climate March (happening this Sunday), et al. Since I track politics with the same fervor that my cousin follows the New York Giants I have no shortage of opportunities to root for or jeer against the actors on the world stage in general, and American politicians in particular.

The latest disappointment is the Congressional vote in support of Obama’s request that the United States equip so-called “moderate” Syrian rebels with weapons and training. The gods that hold court in our nation’s capital have a wicked sense of irony in that Barack Obama, the man who in my opinion won the presidency as a protest vote against George W. Bush’s war in Iraq, is now committed to wrecking Iraq’s neighbor, Syria, in similar fashion. Noteworthy too is that his erstwhile presidential contender, Senator John McCain (R-AR) continues to spur him on.

In contrast, Senator Rand Paul’s speech on the Senate floor (of which I watched the first five minutes) expressed my own opinion that ISIS (the devils from hell killing, raping, and pillaging in the name of Allah) should be targeted and destroyed, but without sending weapons to the Syrian rebels. Despite Obama’s assurance that these rebels will be properly vetted it may happen that we are arming those with potential allegiances to Al Qaida affiliated groups. This is no way to win a war against terror.

Senator Kristen Gillibrand (D-NY), who sits on the opposite side of the ideological fence as Senator Rand Paul (R-KY), echoed the same wary sentiment:

“While I support many aspects of the president’s plan to degrade ISIL’s capabilities, previous history leads me to conclude that arming Syrian rebels would be an ineffective solution with potentially serious unintended consequences in the long-term.”

The following is a comprehensive (and eclectic) list of the Senators who voted against the bill:

Where else can you see Senator Ted Cruz (R-TX) and Senator Elizabeth Warren (D-MA) forming a temporary alliance, if only for one vote? American politics is at times disheartening, but it sure can be entertaining.