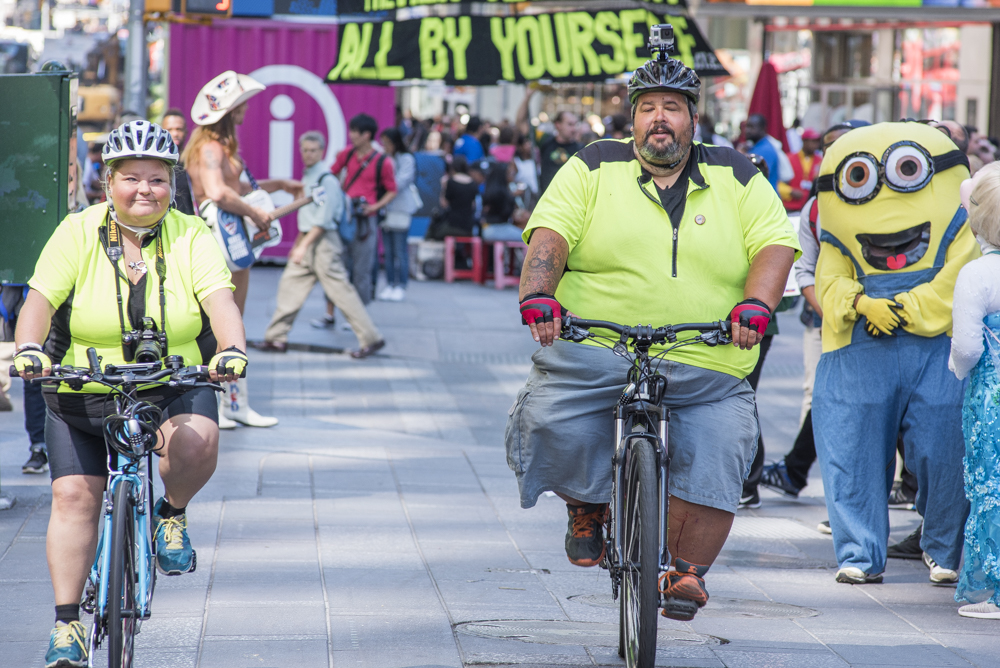 Pope Francis is not the biggest guy in New York City this week­—at least when it comes to weight.

A 560-pound man—hit hard by his wife’s decision to end their marriage—decided to win her back by bicycling cross-country under the moniker, “Fat Guy Across America.” Over twenty thousand currently follow him on Facebook.

Eric Hites, 40, started his trek in Falmouth, MA and arrived in New York City this week. Almost immediately after he began, his wife, Angie Atterbury, was ready to give their marriage another chance.

“I knew, as soon as I got his video of his dad dropping him off in Falmouth, that he was absolutely insane and I needed to get back to him,” she said.

Outside the Loeb Boathouse in Central Park, Hites, his wife, and his media manager, Larry Landsman of AEP Media, met with the press and supporters this morning to celebrate how far he traveled thus far. Afterwards the couple rode their bicycles to Times Square where they held another question and answer with the press.

Just because his wife is now traveling with him does not mean he is ready to call it quits. In fact, Angie will not take his name again until he reaches California. Hites also said that he wants to be an inspiration for others struggling with obesity. In America, the struggle is real. On the website of the federal Centers for Disease Control and Prevention it states that more than one third of U.S. adults are obese.

“It doesn’t matter what you look like on a bicycle or out exercising. Just go do it. They make fun of you, but pride yourselves in going out there and doing it,” he said.

“I have a bunch of fitness coaches working with others starting their weight-loss journey too,” Hites said as he promoted another project, “Fit with Fat Guy Across America.”

His popularity is not limited to followers online. Flanked by reporters and photographers for New York’s major newspapers, Hites turned heads in Times Square. At one point costumed characters including Woody from “Toy Story” and a minion from “Despicable Me,” clustered around him. Even “The Naked Cowboy” embraced the “Fat Guy Across America” with a hug.

Hites said that he wanted press coverage of his journey to help promote his upcoming book, but he was not expecting his story to go viral. He said, “It’s crazy. I don’t get it. I’m just riding my bicycle across the country.” He described the media coverage with one word: Weird.