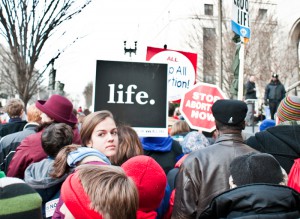 “I am not equipped with the biological knowledge of a woman so I can’t say that it is the wrong thing to do.  It is a woman’s choice.”

“You are wrong,” I fired back viscerally at my friend.  The words were hardly out of my mouth when I realized that merely bringing up the issue of abortion was the emotional equivalent of pouring a gallon of gasoline on an open flame.

For sure there is a reason I fail miserably when I try my hand at debate; which is why I wonder if I should even be involved in talking about abortion at all.

Yet, over the summer I had the personal honor of meeting Hope, a beautiful infant girl.

Her parents are both full-fledged members of the Communist Party so going to the Planned Parenthood “clinic” to abort seemed the logical and “sane” thing to do.

They already have one child and becoming pregnant during a brief stay in the United States had the potential to ruin their lives in China.  He has a good job, and to flagrantly violate the law could spell the end of his career, if not worse.

However, on that day there was a woman on the sidewalk.  She told them that there was another option, another choice.  And they were brave enough to “choose life.”

I was not there to help, and to my knowledge I have never been the voice to convince a woman considering abortion to realize that she is carrying a human person.  My hope is that I will never stop trying.

More of my photos from the March for Life rally in Washington, D.C. can be viewed at: http://georgegoss.com/index.php?c=16 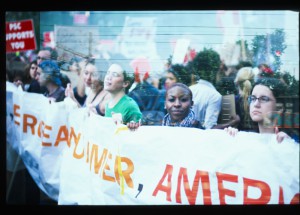 In New York City the big story is “Occupy Wall Street;” and so, with camera in hand, I decided to take a look for myself.

I still wonder, other than frustration over the current economic condition, what exactly does this protest movement advocate?

www.Occupywallstreet.org serves as an open forum of sorts in which organizers present their ideas; and critics and supporters can freely respond with their own comments, often in a disarmingly uncensored way.

Here are several of the comments of both supporters and detractors of “The Occupation.”

I’m a small business owner and employ 4 people, at or slightly above minimum wage. If you raise the minimum wage to $20 an hour then you put my four employees out of a job, and me out of a job as well.

Remember, you also increase unemployment by hundreds of thousands with your whim of banning private insurers.

You do not represent 99% of anything.

So you can only make a go of it by paying slave wages? You have no problem with the taxpayer paying for their food stamps it would appear. Go out of business you exploitive piece of s#@%.

Small businessmen just dream of being big businessmen and disingenuously try to distinguish themselves. Your capital should be seized and given to your employees. Perhaps they can start a co-op doing the same tasks they were doing realizing the profit for themselves.

um…I’m pretty sure that 99% of America isn’t socialist.

The bankers! Confiscate the wealth they have stolen from student loans!

Well, no one forced you to go to college. The reason we are in this mess is because it’s beaten into your head from day 1 that you have to go to college. But what happens when more people get a college degree for a job market that can’t handle that many applicants? You get high unemployment from that generation who cannot pay back the loans they needed for the school they were told they needed in order to get a job.

Stolen? Can you prove that a banker, any banker, has violated the law?  In what way did they steal, and from whom?

Where are these trillions of dollars going to come from? How will companies all be able to afford $20/hr wages? It sounds like this movement wants to abolish the idea of currency in general and just make everything free for everyone ever. This cannot possibly work.

Also, I see that you resort to deleting comments that you don’t like. Keep living in a fantasy world where any of this is a good idea and no one disagrees.

Are you a drone? Can you not see what is happening in this country? Go back to your corporate zombie box.

And now for one more comment, and this one is my own:  I believe that Occupy Wall Street got it 99% right, except they’re missing 1%. Intentionally trying to foment class warfare is foolish, and goes against the interest of 100% of us.  Also, trying to create a new form of direct democracy is in severe opposition to the wise and sound principles which have led this nation through its entire history.  While I believe most of the protesters are curious to see what is going on, those who are leading the pack know full well where their revolutionary road leads, and it is not utopia. 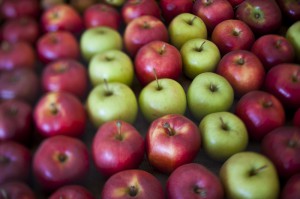 It is harvest time in Guilford, CT.  I know because the apples are the sweetest in the world right here, right NOW.  We’ve all got time, some more than others.  But the clock keeps ticking and the question is: “How are you going to spend it?” 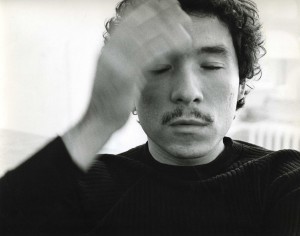 “The CD is in the computer.”

“You mean the images are on the computer, but the CD is where…physically?”

With annoyance the hallmark of my movements I pushed the start button.

With a train to catch, and in stunned disbelief at just witnessing my mom in a Zoolander-style moment, I walked away with a Cali girl-style “What-Ev-er.”  Such was our inaugural day of working together so that she will finally (this time it is for real) publish a book on her friend, the 1980’s fashion illustrator Antonio Lopez.

Beginnings aren’t always chocolate milkshake smooth, but after years of compiling, archiving, and writing my mom is on her way to crafting her book and presenting it to the world; and petty drama aside, I am proud of her.

As for me, my own beginning is directed towards the fairly noble (at least in my mind) if foolhardy aim of sustaining myself as a photographer in New York City.  From today, September 12, 2011 to the 4th of July it is my time to make it happen.

With a D.C. power lawyer cousin making more money in a year than I have made in a lifetime and a close friend who is supporting his parents financially it really is time to show what my investment in money, sweat, and tears was all for.  So while working part-time jobs at BookBook; being the substitute receptionist at the NYU Muslim Center, and just about any free-lance gig that comes my way will probably be my lot, I am ready to show that I can indeed create art.  At twenty-eight years old, I feel that I am out of the “late-bloomer category” and into the “will it bloom barrel!” but here goes nothing.

In the words of Tony Kushner, the commencement speaker for my graduation from SVA:

And so to begin: This is the first of hopefully many posts to document my attempt at being an artist; and (whether I succeed or fail) to tell of the characters that I will meet along the way.

Erin Wilson is my hero.  I only met her several times yet there is a reason to fall “head over heals for her.”  The most obvious if somewhat selfish reason is that she invited me to not only witness, but also to participate in her yoga class for high school students from James Baldwin School in Chelsea, as well as a workshop in non-violent communication.

Erin is the teacher of Integral Yoga’s “Yoga at School” program.  The mission statement is to share with the students “how to manage stress, create peace in their lives, and radiate that peace into the lives of others through breathing practices, stretching, relaxation techniques, and meditation.”

Mine is hardly an unbiased opinion as I truly respect the institution that is Integral Yoga.  It is a sanctuary of peace in the West Village at 227 West 13th Street.  I go to the classes far too infrequently.  I know this because every time I do I am aware of how radically the gentle yoga techniques can re-align my body from long hours spent staring into cyber-space.  As a digital photographer the soothing eye movements are welcome relief to the strain of focusing so intensely on the computer screen.

In writing this article my hope was to present the phenomenal work that Chandra-the director and primary advocate of Yoga at School, Erin, and Integral Yoga do in supporting what are known as “at risk” teens, that in-between age that Erin calls a “no-person’s land.”  Erin describes her students as coming from a culture in which “violence is a way of life” with “really rough backgrounds, such as broken homes, abusive situations, and drug addictions. They are coming with a lot of pain.”

Yet on the day that I was privileged to witness and participate in the class each of us was “at risk” of only one thing: having the most fun yoga class that I have ever experienced.

Okay, I am not saying all of this because Erin is a beautiful, rail-thin young woman.  What blew me away was the use of non-violent communication.  I am a strange hybrid of WASP and Irish Catholic so the notion that once can actually communicate with another person is novelty enough.  I have images flashing of Woody Allen’s film “Annie Hall” where he is sitting around the Easter table with his girlfriend’s family as well as the ruthlessly off-color sitcom “Rescue Me” with Dennis Leary in which a typical conversation among the guys needs subtitles for the real meaning.

But to be able to communicate non-violently is surely a novelty for any culture. In a time when war or the threat of war is the status quo and with more broken homes than ever how beautiful to use language to say how we honestly feel. Instead of letting anger fester each of us has the freedom and the right to say, “This doesn’t feel right.”

Some may criticize this by arguing that it is egoism at its worst.  But this is a great deal of what makes things so wrong: People often do not listen.  In order to communicate effectively it requires stating not declaring, asking not ordering.  If we can simply acknowledge that it is indeed a human person we are communicating with what wonders would happen, what hurts resolved, and conflicts ceased?

I for one walked away realizing how there are times when I have failed to respectfully communicate with others.  In describing the philosophy of “Yoga at School” Erin quoted Ghandi: “Transform yourself and you transform the world.”  She firmly believes that her students can “transform our society,” and it is her hope that yoga is not viewed as “some Eastern thing that is far out and for hippies, but a practice that can teach life skills that can have a positive impact on their community.”  It may take some time but she is confident that the seeds of peace are being planted within them.